Welcome to the unconventional running diary of game 4 of the 2007 NBA Finals. It’s the Cavs vs Spurs
It’s just myself, Rob, a couple of bottles of ‘V’, a variety of beers… and some Milky Ways (thanks Rob!)

Just a couple of observations on the great opening montage with the past champions spliced together. It really shows me the way finals used to be… Getting up on cold June mornings to watch Shaq and Kobe (with hair and goatee). Rudy T and his “never underestimate the heart of a champion!” Speech. Not to mention the least unlikely looking superstar of the day, Larry Bird (that title now belongs to Gasol), and Magic Johnson, someone who I based my alter ego Magnificent Johnson. Anywho, man that pumps me up! Too bad I have seen the first three games and remember that this certainly is no riveting battle…

The game is coming to us from CLEVELAND OHIO, Lebron enters and I can’t decide if he’s dressed up or not wearing a nice vest over t-shirt and sunnies (maybe suffering from the effects of becoming a father the evening prior, more on my issue with that later)
It’s encouraging for us fans hoping to see the Cavs avoid going out in straight sets that MIKE BREEN rates their chances as “impossible”...
You have gotta love the look of Big Z, Surely when he finally retires and his feet or necessarily amputated and used as kids snowboards. He could surely get a movie role in the next bond movie, as a crazy European guard smoking in the cold playing poker on porno cards villain ala John Salley in Bad Boys!

I really love ESPN - ads! – Particularly some of the Sportscenter ads, like when they rip off their warm up suits to reveal their game time suits! Classic… but there are a couple I have issues with… Three words “Chattanooga choo choo” Now this ad isn’t around anymore, but it’s the same guy with the same dumb ass tricks… who is your target audience here? Why are they on so often? Is pool so popular in other parts of Oceania that we have to be subjected to this hick??

And then there’s the AFL (not the good kind) The Arena football league – poor mans “Baseketball” – which I’m not even sure is on ESPN?... I’m conveniently forgetting the one dubbed over by the Aussie guy about us kids growing up worshipping baseball… please just don’t show us! It only makes me angry and my blood pressure is high enough after all this caffeine!

First Quarter
First basket Drew Gooden layup – what the hell is the deal with hair patch, it’s growing out and looks atrocious. Oh no! Vertebeard is growing out, “that shit is gross!” – to quote Dave Chappelle 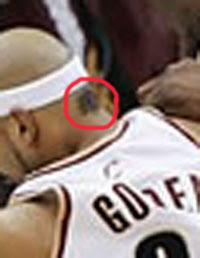 Finley Mr Nice Guy first spurs bucket- He played with Anstey in Dallas, there is a great play where an Anstey block leads to a Finley Tomahawk, but I couldn’t find it. This is sweet though, as they hook up at around the 3.20 mark of the clip!


Gibson starting again
My main Sasha hits for 3 – there is something about him, more like an Aussie type player, Glen Saville like attack.
First of Tony Parkers amazing drives, making Cavs look like, well, a slow team
Q1 9.50 remaining: James first bucket
Don’t really like this camera view following player. Neither does Rob “I don’t like it” like video games, can’t see whole court Rob is somewhat viewing challenged as it is and at this view you miss seeing what is happening on the opposite side of the court in the Bruce Bowen, or Donyell Marshall corner (which ever way you are going)
First 3 for Boobie Gibson– how do you get that nickname?
Is that true
Do it for Bryce! says one sign! for new daddy James, lots of congrats from spurs before game.
Mum 16 when she had him
Q1 5.46 remaining: SA 8 CLE 12 Phoenix Suns basketball it is not!
B Bowen bad boy Bowen first bucket
Parker just breaks the whole of Ohio’s ankles sick move! “See you later Boobie” – Mark Jackson…
“It’ll get ya drunk!”
Q1 3.37 remaining FIRST EVA SITING – Not disappointing at all!
Rob regales me with tales of screwing up with love. Tells me forgot to put clutch on. Stalled in front of chick sitting in car next to him ‘I felt like the biggest tool’

What was up with those awkward silent shots leading into end of ads no sound jut view.. strange..
I just know it’s caught out so many people double checking the batteries in the remote control! These ads have people thinking their TVs are screwed no volume
Eric snow in 96 rookie for Sonics in finals
Oberto makes me think Mackinnon could make it as a mature rookie. He would eat pieces of Fabricio for breakfast one on one!

Donyell Marshall not done a thing except look scary
Lebron first* baseline dunk 1.17
Varageo side show bob
Gibson playing like he looks young and scared, he has to be the youngest looking starter in the NBA Finals since BJ Armstrong

Quarter time SA 19 CLE 20
Meanwhile on channel v fitty cent is back, and his rhymes haven’t lost any of their intellectual prose… “i'm laughing straight to the bank niggas hahahahahaha ha ah…”

Michelle Tafoya – tells us Poppo tore them a new one in huddle.
Yawn… Spurs layup after layup.

As I struggled to differentiate between my v and beer, I started to think how to describe players as drinks. If these players and their respective games were drinks:
Donyell like Tooheys Red - too shit for anyone to try more than once.
Bruce Bowen is like cask wine – cheap, dirty, effective, and I’ll leave you with a headache at least!
Duncan is Beer – does the job after repeated doses, always a safe bet!
Parker is ‘shots’ – hit you fast and often leave your head spinning (see:Boobie)!
Ginose-bili is a Jaga bomb – Jaga half leaves you with a bad taste in your mouth i.e; all the flopping, Red Bull half - Reckless abandon, health be damned!
Andy V – milky way and Grolsch – not a good combo all round. Definite chance of throwing up! (see: last shot game 3)
Lebron? - really depends on how strong the mix is - Bourbon and Coke!

My hopes for an LBJ scoring 40 pts are fading aren’t they?
Freeze cam shows time after time Lebron 1 on 5 hitting open men who always miss! (see my comments on Marshall and Gibson)
Random metro sexual thought of the half: Tony parker clearly has a monobrow that he shaves
Q2 7.36 remaining: SA 27 CLE 25
BOOBIE BLOWS LAYUP… hehe I love that I can say Boobie.
Rob is getting side tracked. I can’t blame him? He tells me of his drunken late night questions of Seek 1234 – are the ass hairs pubes ‘they have the answers for everything’ – yes they are?- on the cheek is just hair.
Now that that is cleared up.
Duncan flash back Jamaican wig turk dirk and a jerk joke…
The less Big Z uses his feet the better, like Dennis Cometti would say “Like Pavarotti on a skateboard.”

The Spurs, remind a lot of a team that currently is the bane of my playing existence Tuesday night B1 at Eltham (((sporting pulse link)))Northside cobras demoralise us in the second half and spend it organising the pizza they want to order, then call time out to organize. Too good. Jerks. Much like the Spurs.
Sa 37 cle 31 Parker 6-6 fg 15 points 2.26 Duncan 0-5fg
Early pick Finals MVP…. It’s big. 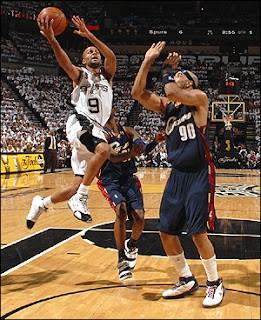 The crowd is joined by OHIO’N’s (that looks like onions!) Usher (who I’m sure I spotted recently in the Gods Must Be Crazy” and Good ol’Drew Carey – considering the lame ass music they have had on the telecast I’m surprised they didn’t get Drew up there to give the old “Cleveland rocks! Ohio!” Song from his show?
Plus footballers Tom Brady, ah wrong town Tom? (well Celtics wont be in the Finals for a while) & Terrell Owens in a bright Jordan t shirt… 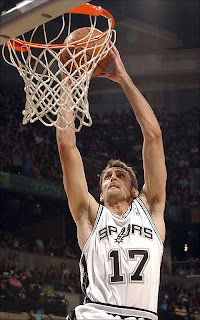 Daniel Eades vote for Cavs in 6, not looking good….
I would not want to cop a headbutt from mike brown…
This game is truly affecting me now obviously.

Halftime score – sa 39 and cle 34 POINTS IN A HALF!!
9 points for Akrons finest…
Halftime Break– Grant Hill “Tony Parker is this series finals mvp”… already said that! Plus, grant hill drinks Sprite!
Jon Barry – “didn’t think it could get any worse… this is terrible!”…So is his your make up/fake tan job Jon…
Ryan Mobilia - “Lebron should just try and dunk on them all!” - the would couple the most entertaining outcome with the most effective!

Now to the 2nd half
Gooden first bucket again, what happens in between first plays? He's good…
mark Jackson is dying from how James isn’t doing much..
Dancun half white
We are informed that both James and Bowen had sons during series.
James girlfriend Savannah? gave birth to King James 2nd Eyre to the Throne, Bryce Maximus, just the evening before the game.
They could be d’ing up on each other in 20 years?
Parker again blowing by the Cavs
Q3. SA 44 CLE 36 q3 9.15
Z bucket then block on Duncan
Bowen’s birthday
You know this is terrible when Lebron is the high scorer for cle with 9 points! 7.31 left in 3rd
I get distracted. Rob tells me… 2.30 metres tallest man in china, just got married. Z is 7 foot 3, Yao 221cm?
We learn Cavs haven’t led in 2nd half any game! 33% shooting.
David stern in crowd - surely cringing at the awfulness of these Finals.
What number would you choose?
11pt lead very quiet in the arena sa 56 cle 45. 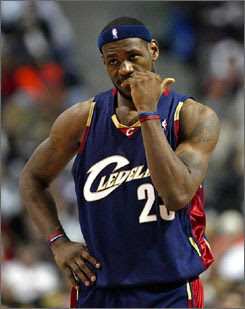 He needs to watch more ‘My Name is Earl’.. karma is a bitch.
Treat me like shit and get swept… Sorry should have warned the reader(s) with a *personal vendetta alert!*
Ahh I miss jump balls, and “Jump Around” by Naughty by Nature - It’s just always a feel good song and the NBL isn’t the same without it! See: Happy Gilmore and Mrs Doubtfire (thanks rob)

Start of 4th sa 60 cle 52
4pt game after lebron aggressiveness, tip in by mad dog marshall.
Then some random thoughts, which ultimately lead to me yelling at the screen!
Mutombo UNICEF add.. Ask me about my “Who want to f##k Mutombo!” story… Classic!
Chris Jent of nbl giants standing in background of cavs…
Snow looking like gibsons dad.
Side show bob draws offensive foul… most in league
Why does it take him so long to drive the ball!
SHIT!
Then all of a sudden! They catch up!

Here is my relatively unedited version of the events from this point. The alcohol, V, Milky Way combo, was having some strange affects on my thought process…

Every time Duncan catches the ball someone is yelling AHHH AHHH AHHHHA! Like a Screaming caterpillar lady in crowd!, (Simpson’s reference) “Then why don’t I hear sleep screaming?”

Offensive board after offensive spurs 11-0 run, ending with Oberto 3 point play.
Hustle by ‘the big fundamentals’ (Duncan) is amazing!

72-66 2.23 Left
14 point run. Ended by james 3
I really want to see someone knock Duncan the f##k out.
Or Gooden to punch out Bowen, Gooden is a bad ass.
The fat lady is singing…
30 secs left 7 points.
Brett brown and Chris Jent connection? Pat Reidy anyone? On the scoreboard.
Eva embarrassing 16 secs left only second siting. David Robinson siting!
Three free throws for damon jones to bring it back to 3? 7 secs
79-76 7.5 left…
James for 3! Hits it!
Ginobili fouled no timeout soooooo….
Game over!!
Jones on buzzer for 3 – 83-82…. NBA champs 2007
Hugging like crazy!

Timmy is giddy like a school girl! Still sounds like a nerdy teenager. But wow, 4 championships is huge!
Oldest team in the NBA 8 players over 30
Duncan 4 rings Horry 7 Parker 3 + Eva every night!
Eva overload
Dan Patrick stern presents trophy…
MVP trophy goes to le Tony Parker!! Bonchonts!!!
Interview Mike Finley – I might just put it in (the ball) the bed between me and my wife now!
Most successful franchise in any major sport over the past decade! 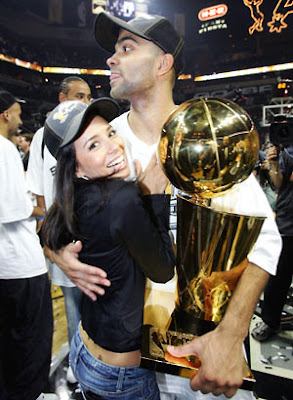